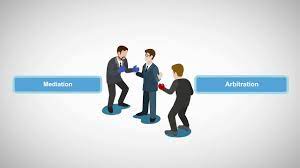 When problems arise under international commercial contracts, international commercial arbitration can be used to resolve them. Alternative to litigation, it is governed by the contracting parties’ prior agreements rather than by national legislation or procedural regulations. When it comes to contract conflicts, most clauses stipulate arbitration rather than litigation as a means to resolve them. For instance, when negotiating a contract, the parties can agree on a venue, procedural procedures, and controlling legislation.

Some of these laws are international treaties and national laws (procedural laws and substantive laws), together with arbitral institution procedural guidelines. Arbitral awards rendered in the past have persuasive authority, but they are not legally binding. Doctrine can also be used to refer to scholarly commentary.

1) It is an alternative to national courts

2) it is a private mechanism for dispute resolution

3) it is controlled by the parties

The system of national courts is the most common mechanism for resolving conflicts. States are responsible for ensuring that these courts function correctly and for establishing substantive and procedural guidelines for their proceedings. There are a number of drawbacks to litigating in these national courts, including large expenses and delays. With the volatility of litigation and globalization, arbitration has become a preferred method for resolving disputes since it is viewed as more flexible and quicker. It’s a quasi-judicial agency that draws its authority from an arbitration agreement, not the national court system. National courts have no jurisdiction over a dispute when an arbitration agreement is in place, giving sole authority to the arbitral tribunal.

Types of SAP Software for Your Business

Platform Supply Vessels (PSV) As Per The Deals

No Replies to "Why Choose Private Dispute Resolutions?"